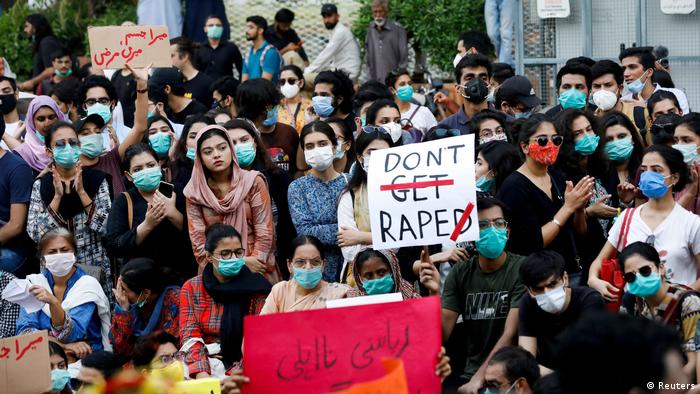 The past few years have seen a rise in the feminist movement within Pakistan. Women are joining in on Marches on the street, are using social media as an outlet and are finding the courage to speak up and use their silenced voices. Despite the harsh criticism from anti-feminists within the nation, and the negative image given to the idea of feminism thanks to negative media portrayal, these women have mustered up the courage to demand change in a nation that has only ever known the power of men.

That said, women within Pakistan, even ones doing everything in their power to promote the idea of feminism, are reluctant to talk about marital rape. Marital rape is an issue common in many South Asian countries as a husband raping his wife is not deemed illegal. Women within Pakistan are facing the difficulties of speaking out about the different sexual assault and rape instances that have occured behind closed doors. A marriage is not the consent that is needed for the engagement of intimate activities, yet individuals within such nations seem to think otherwise.

The Pakistani Aurat March (womens march) has increased the number of women speaking about issues of feminism including the right to bodily autonomy, safer public spaces and an end to violent sexual crimes. Movements such as #MeToo and #TimesUp has also provided platforms for these women to speak out, yet many remain hesitant.

The reasoning behind their silence on such a topic, and the hesitation that follows when desiring to open up about such stories, has a lot to do with the lack of potential for such cases to go to trial. In early 2006 a bill was passed in Pakistan to protect the women within the nation. Rape was given a new definition, and when considering such a definition, marital rape would be considered a criminal offence. However, the lack of specific mention of the idea of marital rape has allowed for various judges and lawyers to find loopholes to ensure the security of the male population within their nation. High Court lawyers in Pakistan explain that there are “no known convictions on grounds of marital rape” within the nation, despite how normalized such an act is in the lives of various married women. The same lawyer mentioned that “even if a complaint is filed, the case does not go to trial,” Such is resultant of the possibility for creation of loopholes when such bills are analyzed in court, but it is also due heavily to culture and false interpretations of religious morals and values.

Many women feel ashamed, or are made to feel such, when made victim to marital rape. As a result, they grow fearful of reporting their husbands. Many individuals also interpret marriage to be a shield from legal action taken against non-consensual intimate acts, which allows for the victims of marital rape to be silenced by those in more “superior” positions to them. Culturally, many families have a huge say in the relationship between a husband and wife, making it more difficult for justice to be sought out.

In a nation defined as a “man’s world” religion and religious interpretations have been disgustingly altered in the minds of some men. In a recent reported case of a marital rape survivor in Pakistan, she mentioned that her husband “would say if I pleased him in bed [that] I would go to heaven directly, and if he was angry with me, no matter what I did, I would go to hell,” Such interpretations of religion are not only flawed but are absoutely disgusting. Consent is not obtained from the singing of a marital contract, rather is something obtained in the moment. This marital contract has been made to be used as a trap for women in the minds of some men. The show of superiority has been deemed so normal that no individual bats an eye when such conversations are brought up.

When questioning an Islamic cleric in Pakistan, he mentioned that “signing the marriage covenant in and of itself establishes consent”. Such a statement was followed by an uproar of individuals protesting such, emphasizing that such is neither mentioned in the religion they know and follow, and nor should it be accepted as a cultural norm.

Each year the Pakistani Aurat March aims to focus on a different issue affecting the lives of women through their nation. Many are hopeful of a march against the idea of marital rape, but many remain questioning why such has not been adressed in these powerful marches over the past few years, especially considering how common such has become within the nation. Many orginizaers have spoken about how the lack of reporting on marital rape has made it difficult for them to march against it. They’ve mentioned how the lack of a dedicated march against marital rape does not mean conversations are not happening about such in the background.

Organizers mention how this march is a “people’s movement, and that demands for raising awareness of issues must first come from within the people.”

Marital rape is an ongoing issue within many nations, and individuals, not only just the victims, must speak out and demand change,

Enough silence has been used to conceal the extent of such an issue. Our actions today will lead to a better and safer tomorrow.