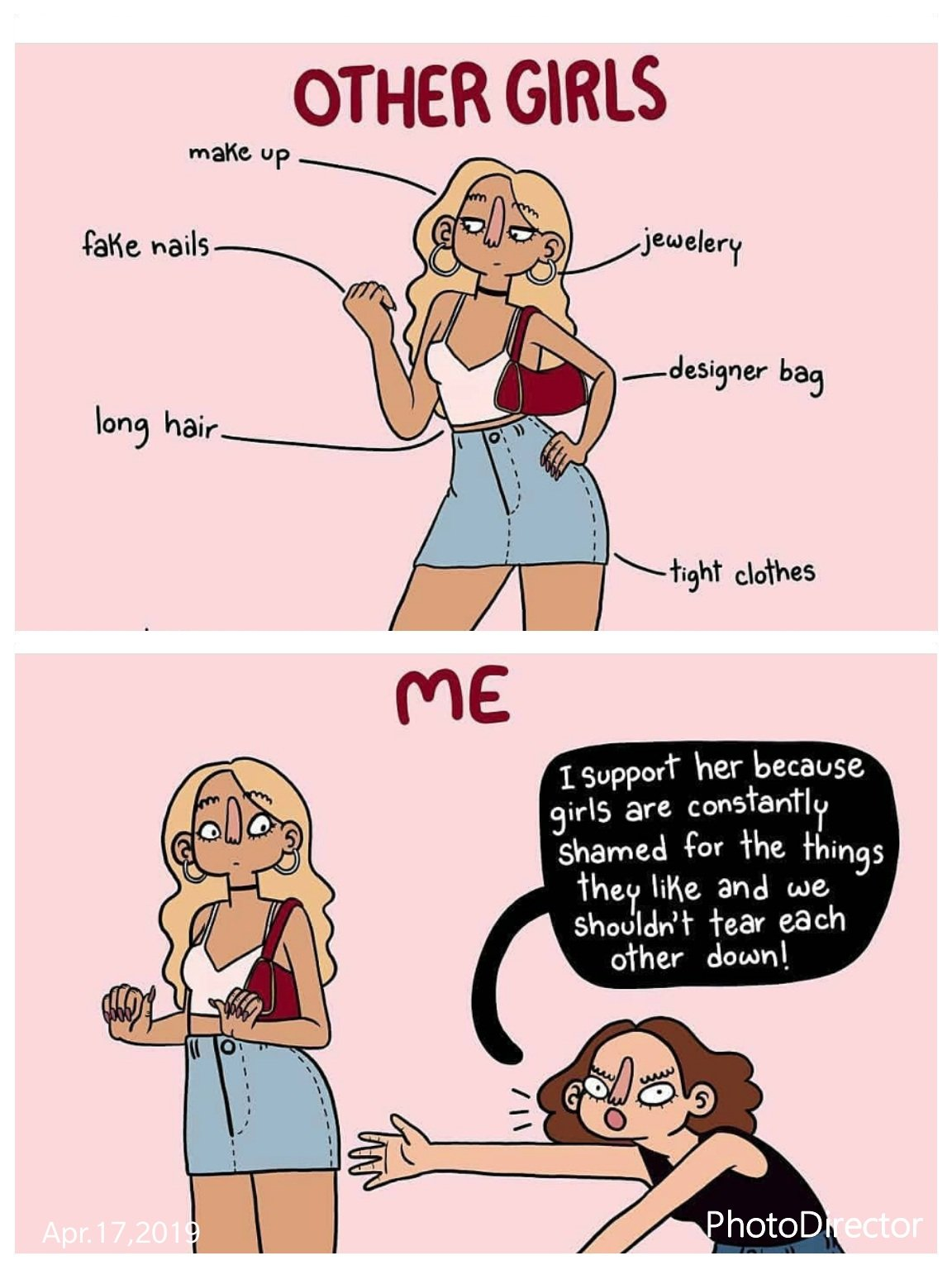 In human nature there’s a mentality called ‘us vs them’. In all kinds of situations this can be found, whether it be our country vs theirs, our school, our class and even our friends vs theirs. Rivalry is part of us as humans however that doesn’t mean we shouldn’t fight it or enforce it.

In the 2010’s there was an increase in this sort of behaviour, it was the ‘I’m not like other girls’ trend. This was when girls would try and stray away from the standard feminine stereotype, so it wasn’t that they weren’t like ‘other girls’ it was that they weren’t like feminine girls. The problem with not being like other girls was that it couldn’t just be “I prefer more masculine things”, it had to be “I prefer more masculine things, therefore I am better than any other girl.” There was a superiority level involved, and it meant that now masculinity was superior to femininity, yet again. This type of doing becomes very toxic because it makes it seem like being more standard is bad.

Another participant in ‘feminine vs masculine’ is slut shaming. By definition a slut is ‘a woman who has many casual sex partners’, so why has it been used against a woman who wears a lot of makeup, or wears more revealing clothes?  I still don’t know the exact reason however the effect on slut shaming is quite large. Not only does it make it seem like being feminine is bad, but the mental effects on a victim of slut shaming is apparent. Girls like Phoebe Prince come to mind, along with slut shaming many other things that happened to her but the damage had been done. Slut shaming brings down girls, makes them feel bad for wearing what they’d like, and even if they do fit the definition of a slut, should they really be made to feel bad about it? Why do boys get celebrated for the same reason that a girl gets teared down?

Of course not all masculine women are like this, in fact many of them lift up feminine women. However the outliers always tend to be the greatest problem, but that’s with anything. Another thing to remember is that feminine women aren’t clean either, in social settings it isn’t uncommon to hear someone make fun of a more masculine woman for just being themselves. Phrases like “ugh she’s too boyish”, or “she’s just doing that for a guys attention,” are unfortunately not abnormal. A girl who lifts will be ridiculed because she doesn’t fit the standard look of a girl. Even girls who lift and still want to look feminine, they still are set apart.

At the end of the day, girls should not tear down other girls. It should not be ‘us vs them’, it should be ‘us and them’. Whether you prefer more masculine things or feminine things should not correlate to how womanly you are.