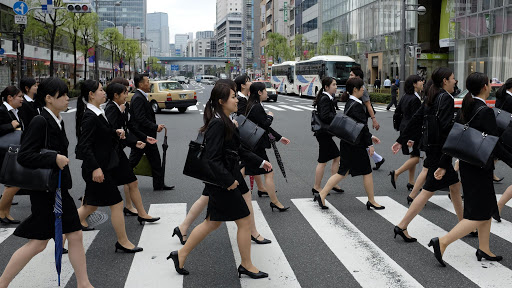 In August of 2018, a huge scandal broke out in Japan involving Tokyo Medical University, a well-respected medical school in Japan. It started in 2010 when the exam results showed that 40% of successful applicants were women, a huge increase from the year prior. Instead of using this opportunity to reduce the unfairness between women and men in the medical field, they did the exact opposite. It was revealed that they were manipulating the exam scores of female applicants for seven years to reduce the number of women within the student body. The university’s excuse for their actions was that women quit their job as a doctor once they get married and have a child. Though this incident caused quite a lot of uproar, it is just another case in a sequence that has been going on for years in Japan: decisions on the lives of women being made by groups of men. As a result of this pattern, it is incredibly difficult for women to be successful in the workforce.

The difficulty of working as a woman in Japan starts in the classroom. For starters, because girls tend to score higher on high school acceptance exams than boys, the required score is higher for girls. The justification for these practices are to make the number of females and males equal within the student body. However, later on in my life when these girls apply  to college, the same rules do not apply. Tokyo Medical University along with several other medical schools were fixing scores to make the student body only 30% women. Only 1 in 5 students attending University of Tokyo, the most elite university in Japan, are women. In seven national institutions funded by the government, only 25% are women. Furthermore, in college, the education of women is not valued or respected.  Up until January this year, there were 23 clubs in the University of Tokyo that would not admit female students who attend the university. The men involved prefer girls from universities that were of lower rank because “they aren’t as clever.” By making it difficult for women to receive education and opportunities of the same quality as men, we are setting women up for failure in the workforce.

This discrimination follows women to the workplace. In 2018, the World Economic Forum ranked Japan 110th out of 149 countries for its global gender gap index which looks at factors such as wage gap and participation in the workforce. Over half of medical doctors in Japan supported making it harder for women to enter medical school because women don’t return to work after getting married anyways. Why does this happen? Japan’s culture supports women who take care of their family rather than making an income. Japan heavily lacks day care options and men typically don’t do any housework. Thus Japanese women have to make a decision between having children and building their career.

There are ways we can make changes to our corporate culture to make it easier for women to work. One obvious change that should be made is to start looking at results rather than the time spent physically at work. This would allow for families to have two working parents, instead of the mother giving up her career. In addition to this, we should stop stigmatizing paternity leave. Even though Japan offers paternity leave, only 6% of new fathers take it. Companies should reinforce that taking paternity leave will not negatively affect careers. Instead of thinking women should stay home and men should remain at work after having children, we should also consider the option of the man staying home.

These changes could help increase the birth rate in Japan. With the option of having a career while raising children, more women may choose to have children. Furthermore, both parents could create an income that could remove some of the financial burden that comes with having children. Allowing more women to work would also increase productivity. So let’s take a pause and reevaluate the way we, as a country, treat women. Instead of making it more difficult for girls to get into a university, we should encourage them to explore their interests no matter what field that is.