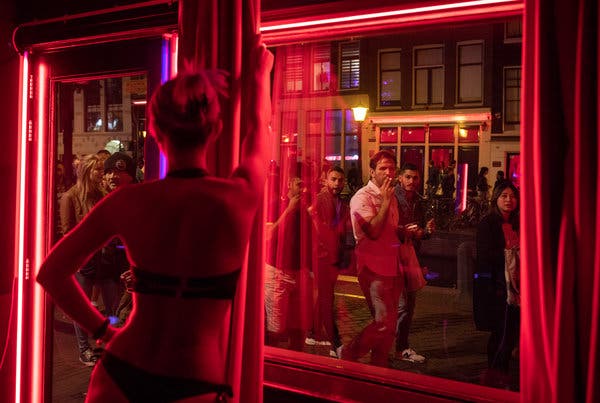 Sex Work has been around since the beginning of time as it seems, being dated back as far as 2,400 BC. When my family and I were in Amsterdam we had to go through the Red Light District. There my sisters and I learnt about the scene and as a family we agreed that we must respect them, as their service is valid. However, it is unfortunate that many don’t think like this, many people believe Sex Work is a product of no self respect and therefore I believe it needs to be adressed along with the issues that come with it.

First and foremost it needs to be said that Sex Workers aren’t selling their body, but rather selling their service. A lot of this service is not limited to just intercourse, although that’s obviously a main event. Sex Workers that my family used to know have said that over half of what they do is attend to their clients mental health. The Dutch Government has even recognised sex as a right, so much so that there is a policy in the Netherlands where people who are disabled receive a certain amount of money to see a Sex Worker to fulfill their need if they can’t get it ‘naturally’. There are specialised Sex Workers who handle this and it has been proven to have more than just one benefit. Sex Work helps with the need of ‘intimacy, validation, stress relief, stronger self-esteem, helps to deal with stress and even physical pain’.

This is just the workers in the Red Light District though. There is a clear distinction between those who choose this line of work and those who sought it as a last resort or are being forced to do it. Those who have it as their only option are normally found in places called Tippelzones in the Netherlands. Many of the women who walk around in these tippelzones have admitted to using the money they earned to feed their addiction to drugs. In this case, they are selling their body, because they are servicing no one but their addiction. When addressing empowerment around Sex Work, it is important to remember where they are coming from, whether they chose to work like this, whether this was the only job they could get, or whether they are being pimped and or forced into it. Only 1 out of the 3 are empowering or acceptable.

But addiction isn’t the only problem we need to protect the industry from, there are also people not being able to speak up about sexual assault because they’re a Sex Worker. Having a scary and traumatic experience be brushed off because ‘that’s what you for a living’ is ridiculous and harmful to the victim. A way to compare this is by looking at the difference between being touched by a random old man on the train or by your significant other. A consensual environment is what Sex Workers emulate, consent is the most important part of their service, and so it can be compared to intercourse between partners. Saying that a Sex Worker can not be sexually assaulted is like saying a professional swimmer can’t drown.

Speaking of violence towards Sex Workers, many have been discriminated against because of their job. In this entire article, I have purposely not used the word prostitute, because it can be considered a slur. Younger girls who are a little more promiscuous may have been told you’re such a prostitute. Because it has been said in a demeaning way, it can be taken as an insult. Replace the word with Sex Worker, and it can no longer be used in a derogatory manner. You’re such a sex worker, doesn’t exactly have the same tone.

The Netherlands in comparison to the rest of the world is very open to sexuality, they accept all forms of service and as a whole the community is very respected there. I believe this is important, as consensual sex is practised in safe environments, which is very empowering. Sex Workers put themselves out there, they may receive backlash and discrimination but at the end of the day, they work, they service those around them and that is empowerment. These people should get nothing but the respect they deserve.