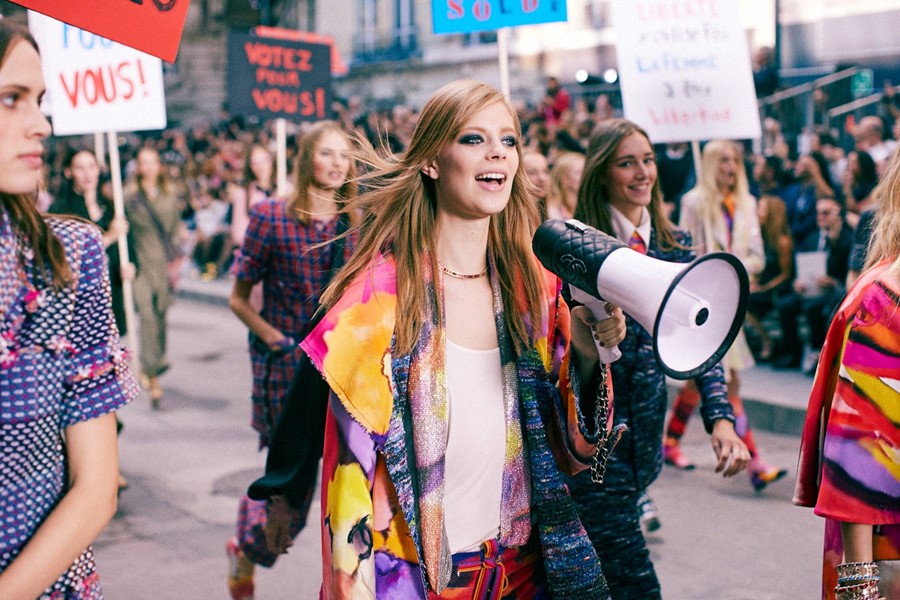 Women’s fashion has come a long way since the first world war. From lacy skirts to cargo pants, tight corsets to oversized shirts, fashion has always reflected the reality of people’s roles, from restriction to comfort. Prior to WW1, women’s dress often reflected their social status – whereas upper class women would change their dress four times a day, the middle class purchased mass produced clothing that imitates those in the upper class. As the war began, radical changes to women’s clothing emerged. While men were at war, the world became ruled by women. They harvested and supplied food, fixed cars, drove the buses and worked in factories, taking over the jobs that men left behind. From 1914 to 1918, 2 million women replaced men in employment. Living the life of a man ,many reflected on their roles – could the traditional, feminine role in the society be a mistake? Since both genders are capable of the same thing, why are they treated differently? This constructed the perfect base to the steps towards women’s independence.

Coco Chanel, founder of the luxury brand Chanel that many of us know of today, was a symbol of women’s rights. Amy de la Haye and Valerie Mendes wrote ‘One of the most radical developments for women was the gradual acceptance of trousers, which were no longer considered either eccentric or strictly utilitarian’. As pants represented freedom and freedom of movement, which mirrored the flapper culture in the 20s, Chanel greatly promoted the acceptance of women wearing pants and was photographed wearing loose pants several times.  Chanel used her signature skirt suit to replace superfluous designs for more androgenous silhouettes, empowering women in work and business. Years later, designers continued to update women’s wardrobe through their feminist understanding of fashion which keeps in line with social changes in women.

Miniskirts were popularised by Mary Quant in the 60s as a way of rebelling against misogynistic restrictions. Traditionally, women were never allowed to show much skin as it was considered ‘seductive’. As women gained rights to birth control when the contraceptive pills became available in 1961, miniskirts entered women into a new era of sexual liberation. Quant showed women that they are not doing anything wrong by wearing what they like.

Today, fashion is defined by the modern definition of feminism: equality in both genders. Unisex designs is now the trend in fashion, both genders are allowed to wear the same clothes without being discriminated. A woman can wear suits and a man can wear dresses.

Throughout history, there has been a strong and complex link between fashion and feminism. Clothing is no longer just about the aesthetics, but also a statement. Shared symbolism is a statement, it’s everywhere in the wardrobe, like an everlasting movement for female liberation.