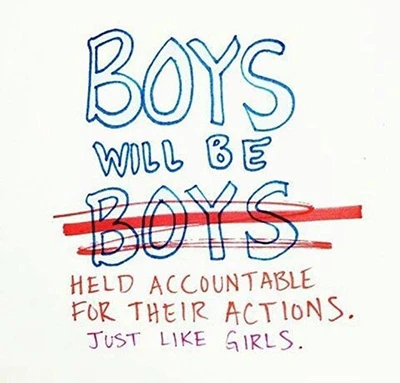 “Boys will be boys”. This is an idiom that we hear too much. It is often used as an excuse for flippant behaviour from boys and men of all ages, from rowdy behaviour to sexual harassment allegations, assault, rape, and other serious crimes. Too often, the sentiment is used to normalise men being violent, aggressive, predatory and sexist. Us women, on the other hand, are routinely told to just accept that. This results in both a distortion of the masculine experience and a subversion of the female one.

The phrase “boys will be boys” first originated from a latin proverb – “children are children and do childish things”. Needless to say, if it had remained intact as such, the saying would not be so problematic. There is a sense of truth in the statement, that children in fact do childish things, and that’s to be expected to some degree.

However, like history’s bad game of telephone, over the years, the proverb has morphed into a facetious way of excusing the behaviour of men in general. The most blatant problem with this is that it doesn’t hold individuals responsible for their behaviour and choices, but rather, infers that all males are inherently programmed to act in such ways, promoting disrespectful behaviour with a lack of accountability. It creates the idea that a boy’s gender automatically excuses inappropriate actions or comments because how else are boys supposed to act is not in the way deemed by society?

The harm of these four words extends beyond the lack of accountability and responsibility that is put on men. Another under-reported consequence is that anger and aggression are painted as normal masculine traits. Thus, men are not inclined to find appropriate and safe ways to channel their emotions, leading to cases of domestic violence, assault, and even harm towards themselves through alcohol abuse or self medication.

Despite the fact that we continuously rebel against male violence, the root cause of the issue is nearly never discussed. We’ve taught boys to be boys, to excuse their behaviour, to turn our backs on their actions. If boys are taught this idea of toxic masculinity from childhood, how are we going to expect progress? Ultimately, nothing changes.

It is in human nature to find an explanation for everything, including ugliness and ugly behaviour, finding ways to explain why individuals are acting this way. It seems extremely daunting and overwhelming to confront the fact that we are culturally saturated with historical misogyny. It just seems too complex a problem to solve. Hence, come the excuses. We continuously justify misogynistic actions and fail to create accountability, because doing so just seems unachievable. But there is no excuse for sexism. There is no way to rationalise misogyny. Men are not inherently violent, prejudiced and predatory. In the same way, women are not victims. Through “boys will be boys”, we are oversimplifying genders, defining them through social constructs.

“Boys will be boys” may seem like a harmless phrase to repeat, but the truth is that it comes with detrimental effects for both men and women. It’s time that we hold men accountable for their actions, not condone these behaviours. It’s time to expunge the phrase “boys will be boys” from our vocabulary. There are a myriad of better ways to complete that phrase. Starting with accountability.