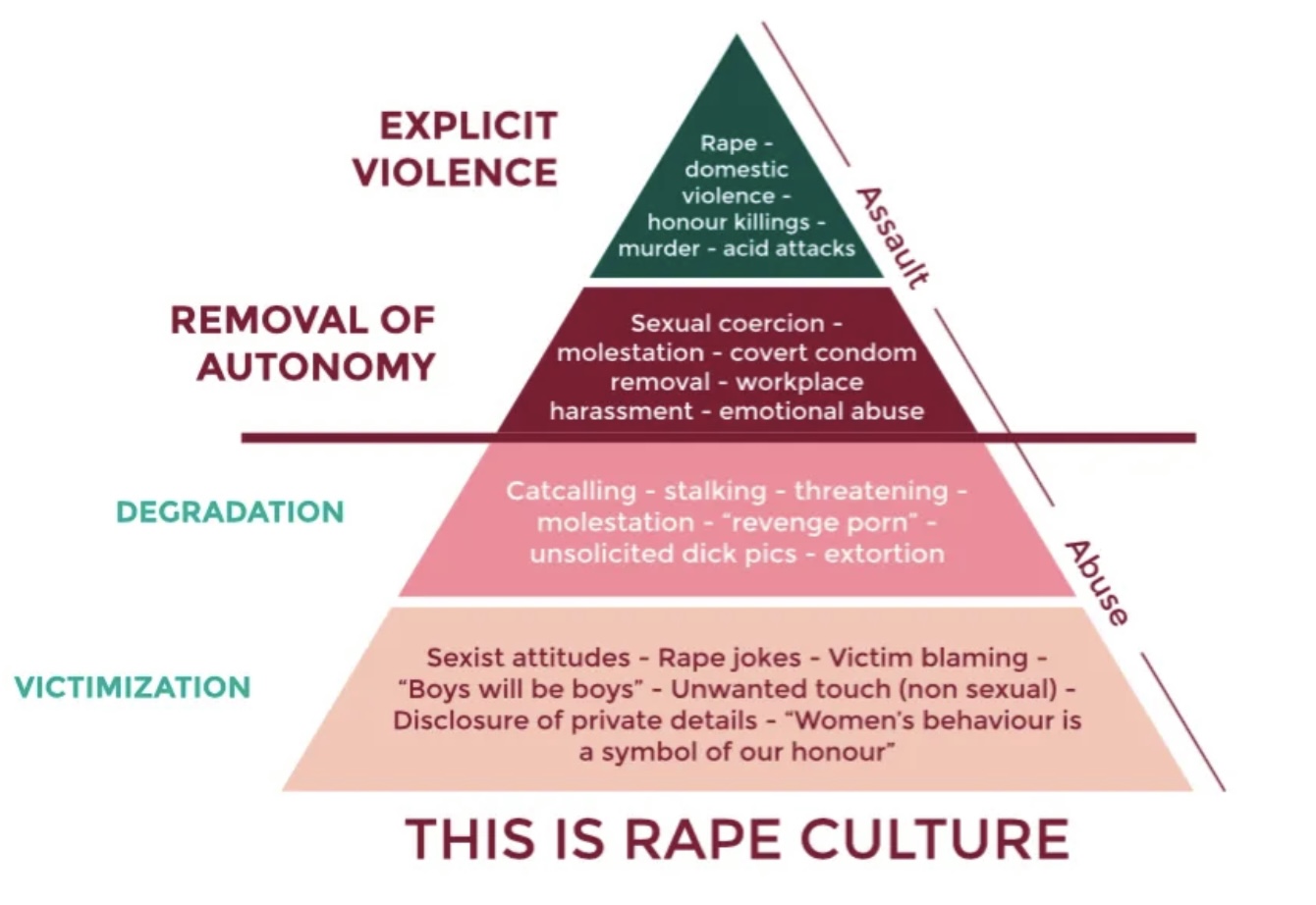 The F in women stands for funny. Of course! Women obviously can’t be funny, they just don’t have the same comedic capabilities than men do. At sleepovers we don’t crack jokes. No. Never. We sit and talk about boys all night, have pillow fights, wear cute pjs and take Instagram pictures, we never laugh and we never make each other laugh. I think it is important to know, I am actually joking and as a woman I can make jokes! I can be funny! I can make a group of people laugh with my quick one liners! I don’t understand why men say women can’t be funny.

On a more serious note, I want to discuss why some people believe this sexist and misogynistic phrase is true. If you have never heard of the rape culture pyramid I strongly urge you to google the diagram and have a look for yourself. In short, the pyramid basically explains how the normalisation of certain ‘jokes’, behaviours and name calling, leads to degradation, which leads to assault. “The tolerance of the behaviours at the bottom supports or excuses those higher up. To change outcomes, we must change the culture. If you see something, say something! Start the conversation today”. These powerful words are what the pyramid entails and an explanation of why certain behaviour is dangerous. But specifically, I want to bring awareness to the ‘humour’ that is damaging to our society.

It all begins in high school when boys and girls start hanging out and going to parties and all that is spoken about in school is what happened the weekend before. Harmless right? Well, a lot of the time, the birth of this sexism, misogyny and behaviour takes place in the boys changing room. Have you ever heard the phrase “locker room talk”, if you have or may even have taken part in it, you will understand what I’m about to say. Locker room culture is associated with male-dominated humour and prejudice, sexist, racist and homophobic so-called banter. And shockingly enough it is at the bottom of the rape culture pyramid, conveying how this attitude supports and allows the following tiers of the pyramid. The crude, vulgar and offensive ´jokesˋ made in this room whether it is supposed to be for comedy or serious, neither is okay. ‘Jokes’ involving name calling, slut shaming, objectifying and victim blaming is the back bone for sexual abuse, sexual assault, racism and what eventually leads to rape, murder and at the top of the pyramid genocide. Now you might be reading this and thinking, jokes are just empty words, harmless, I’m being dramatic! And I somewhat agree jokes can be funny, they are typically empty words with no meaning behind them, but what’s funny about sexist jokes? What’s funny about sexual assault? Racism? Calling a woman a slut? “Boys will be boys” is a phrase used to excuse this behaviour, to pardon this terrifying way of thinking and language that allows verbal assault like catcalling, non-consensual exposure to take place. And what is the scariest thing of all, is that sometimes boys will begin excusing the behaviours of their own friends. “No, he would never do that, no he’s not like that”. The reason this happens is because of that so-called “locker room talk”. Even the 45th president Donald Trump, had to apologise for his past sexual assault comments but used the excuse “I don’t think you understand what was – this was locker room talk. I’m not proud of it. I apologize to my family. I apologize to the American people. Certainly I’m not proud of it. But this is locker room talk.”

As a society and individuals we must stop this behaviour as it is what allows these the other tiers in the pyramid to happen. To repeat what was said earlier, if you see something say something!

All I can say is if being funny means being sexist, misogynistic, racist and homophobic, I am glad the f in woman stands for funny.